I pen this missive to encourage today’s competitors to not commit suicide. Yes, it was horrible. Yes, you looked like someone that isn’t ready to play on the big course, like someone who should be sticking to the course where putting through the witch’s mouth is nirvana, where you’re a hero if your first shot gets past the blades of the windmill. Most of you (like I played well) should have been putting with a white cane rather than a $300 putter. But sometimes, that’s the way the cookie bounces. And besides, the way you played today, even if you tried to shoot yourself, you’d most likely miss anyway.

END_OF_DOCUMENT_TOKEN_TO_BE_REPLACED

The USGA has a clearly defined set of rules for the game of golf. Most of our fellow golfers have a pretty good understanding of those rules, at least when there are witnesses present. On top of these rules, players need to be familiar with any “local rules” which may be applicable on any given course. The extent of the rules that govern our play may sometimes seem burdensome and confusing. However, whenever frustration sets in when dealing with those rules, consider yourselves lucky that you didn’t have to play golf at Richmond Golf Club in England in 1940.

According to one source, German planes would fly from Norway on bombing missions. Because of icy weather conditions, the barrels of their guns had a small dab of wax in the muzzle to protect them from clogging with ice. In addition to attacking industrial targets close to the golf courses, after crossing the coast, they would clear their guns by firing a few rounds at the golf courses. Golfers were encouraged to take cover. It is said they also were asked to play by the following rules. 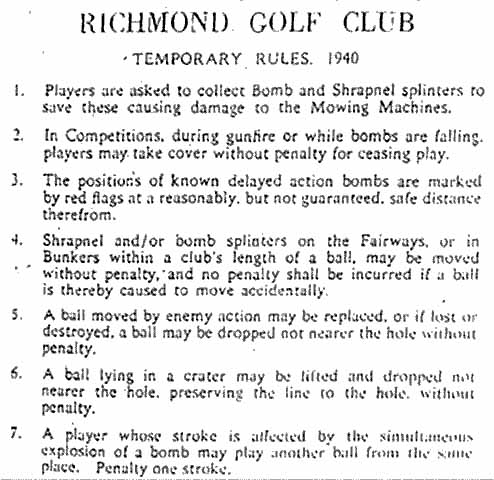 The next time you get a bad lie in the fairway, relax. It could be a lot worse.