Everyone agrees playing a skins game is great fun as long as you win one. Others say it’s not nearly as fair when you’re not collecting a portion of the prize money. The issue of “fairness” is rarely broached by those collecting money, but often questioned by the empty handed competitors. Let’s take a look at the mechanics of “skins games”, especially as played with our regular group at Camelback Golf Club.

In its purest form, a skin is earned when one player singlehandedly scores the lowest gross score of all other competitors on any given hole. A variation on the theme calls for “carry-overs” where any previous holes not yielding a skin go to the first person to win a skin. If everyone shoots a gross par on the first hole and someone earns a skin on the second hole, he wins two skins, one for the current hole and one for the unclaimed skin on the previous hole. This approach to skins is great as long as all players are scratch or even of equal abilities. Personally, I believe it would be fair to play only gross skins, but only in cases where all of my competitors have handicaps higher than mine. So much for that idea. It’s not going to happen except in a blue moon. 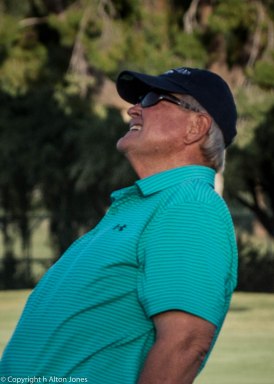 The USGA comes to the rescue with the Handicap System. Handicaps level the playing field, don’t they? Unfortunately, in a skins game where all the players get their handicap strokes where they fall on the scorecard, it doesn’t level the playing field. From a statistical standpoint, high handicap players have much better odds of scoring a net eagle than do low handicap players. If all groups played strictly “net skins”, the higher handicap players would haul a disproportionate share of winnings home. Instead of the high handicappers grumbling with gross skins, the low handicappers will be grumbling.

A common “solution” is to play both gross and net skins games. This calls for a leap of faith where the inequities of the two formats neutralize each other and true fairness is attained. If you believe that’s true, knock yourself out, but I’m not in. The inequities persist especially when a high handicap player runs in that long putt and wins both a net skin and a gross skin on the same hole.

In some cases, groups will play separate gross and net skins games and make participation optional. That may be a step closer to “fair”, but complicates the accounting dramatically. In some cases, one format is optional while the other is mandatory. The end result is there’s one patently unfair game played for higher stakes, while the other game offers lower payouts when those at a disadvantage opt out. 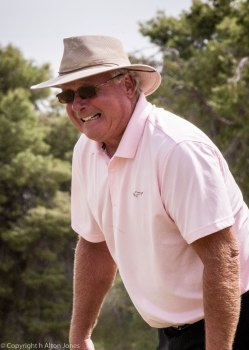 Within our group, we have attempted to equalize the competition by making participation a requirement to playing in the day-game. We’ve done this by playing what we refer to a “combined skins”. Both gross and net skins are paid, but no golfer can win both a gross and net skin on the same hole. From a statistical standpoint, we believe this is a step in the right direction. To summarize this approach, assume all competitors are playing a par four hole and everyone gets one handicap stroke on the hole. If a player wins a gross skin with a birdie, he obviously will also have claim to a net skin with a net eagle. Not so fast; you’ve won the gross. We’re not paying the net skin as well.

Here is the next move toward true equity. When playing within our group, any participant can completely opt-out of the skins game, but he must announce his intention to do so prior to the day of the competition. Once I receive the request to opt-out, the free market comes into play. I will email all other participants to advise them that one or more skins cards are up for auction. The highest bidder acquires the rights to any skins the person opting out may win. The proceeds from the auction are put into the skins pot and distributions are adjusted as may be appropriate given the new prize money balance. In the past, we have had cards sold for as little as a dollar and as much as twenty dollars when the normal player contribution to the skins pot is ten dollars.

One final twist on the way we play our skins game. For a long time, some participants have suggested we add a “validation” requirement to our game. This means that to win a skin on any given hole, the player must score a NET par or better on the following hole. To win a skin on the eighteenth hole, validation becomes dependent upon the results from the first hole. I have analyzed the results from the past 500 or so rounds of golf to see what impact validation has on our games. Here’s what I’ve found.

So why play “validated” skins? You’ll know the answer well when you stand over a three foot putt that is needed to validate the skin you hope you’ll win on the previous hole. Every now and again, even the most inept of us whacks a 35 foot putt into the hole. We shout “Whoopee” while our player partner says, “Hey that could be a skin.” We go on our merry way with fingers crossed.

Now with the validation requirement, the subsequent hole takes on a whole new significance. The adrenalin begins to flow and the excitement level is definitely ratcheted up a notch. Now you’re not only competing against the field, you’re competing against yourself. You’re thinking a little more. Strategy calls for your attention. The competitive juices are flowing and you’re playing golf the way it is meant to be played. Validate and you feel good. Fail and you kick yourself down the path. But there’s always the next match.