Nearly three thousand years ago, The Oracle at Delphi opened for business in Athens, Greece. The Oracle operated for a few hundred years administering advice, wisdom and philosophical insights. Rumor has it the business waned and finally failed when some smooth-taking Roman convinced the Oracle to franchise. Nonetheless, they had a great run for a few centuries.

The tradition lives on in Arizona through The Oracle at Hot Stix. After suffering consternation over life’s great philosophical quandaries, e.g., “Why do wedges chunk when you hit’em?” and “Why are twenty foot putts easy while three footers are nearly impossible?”, I was at wit’s end. Fortunately, humanity has evolved in such a manner that its members find survival value in helping other members of their club. First, Joe Busch (the club whisperer) confided in me. In his customary nuanced way, he said, “Your game sucks! You need to visit the Oracle at Hot Stix.” Naturally, I ignored Joe thinking … opinions are like … oh, never mind. I ignored him. A week later, he looked at my scorecard and blurted out his soon to be recurrent advice, “Go see the Oracle at Hot Stix.”

As time passed, more voices echoed from the rough and hazards on the course as I hacked my way into golf ignominy. While teeing up a provisional on #4 Padre, I heard Jack Summers whisper, “The Oracle at Hot Stix.” I saw Ron Dobkin silently mouth the phrase, “The Oracle at Hot Stix.” Sandy Wiener said, “It’s not in my financial interest, but I suggest you visit The Oracle.” In my dreams, I started seeing images akin to the face of the infamous smiling “Cheshire cat” each entreating me to submit to The Oracle. Finally, when Mike Allison walked by me on the range catatonically chanting, “I’m off to see The Oracle”, I knew it was time.

Joe Busch made the appointment and promised to pick me up at my home. He feared that without a chaperon, I might run in the opposite direction as if retreating from a dentist who had run out of Novocain. It was a twenty minute drive and I’m proud to say I neither cried nor whimpered once during the drive.

We arrived at the Hot Stix site in Fountain Hills and Joe ushered me into the Oracle’s chamber. He then retreated to guard the door to keep me from breaking free and escap 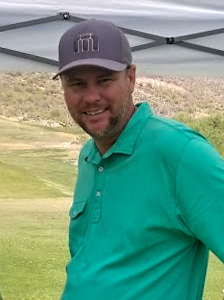 When I finally met The Oracle, I was stunned. He didn’t have fangs. He didn’t have claws. He was rather large, but his smile seemed to paint him as a friendly, if not docile soul as we prepared for the dreaded swing analysis. His name was Chris Marsh. In fact, I’m pretty certain his name is still Chris Marsh. He carries the designation of “Master Fitter”.

Chris spent more than an hour working with me, experimenting with a seemingly endless array of shafts and club heads. After each iteration, we reviewed and analyzed the data provided by some high-tech device called “TrackMan”, a piece of equipment so sophisticated I suspect it can read your mind. Attack angle, spin-rate, club path, club speed, face angle, and blah, blah, blah. If Apollo XIII had had one of these things, they never would have had to call Houston.

As a chemical engineer, this experience took me back into the “Unit Ops” lab where we tested the magic of physical processes. I found the information garnered from my session with The Oracle immensely interesting and helpful. As a student of physics, I started to realize that the use of a trained fitter equipped with high tech equipment like TrackMan could do nothing other than help my golf game.

With this somewhat tongue-in-cheek description of my day with The Oracle, I feel compelled to emphasize one fact.

If you’re playing with clubs that aren’t optimally selected for your swing mechanics, you are not playing your best golf.

If your present clubs aren’t fit to your swing, surely you can hack your way around the course and complete eighteen holes, albeit with less than your best score. However, IF you’re contemplating the purchase of a new club or clubs, you will be smart if you visit a highly trained master club fitter like Chris Marsh before you invest hundreds or thousands of dollars in the wrong clubs. It’s worth the time, money and effort to see The Oracle at Hot Stix.